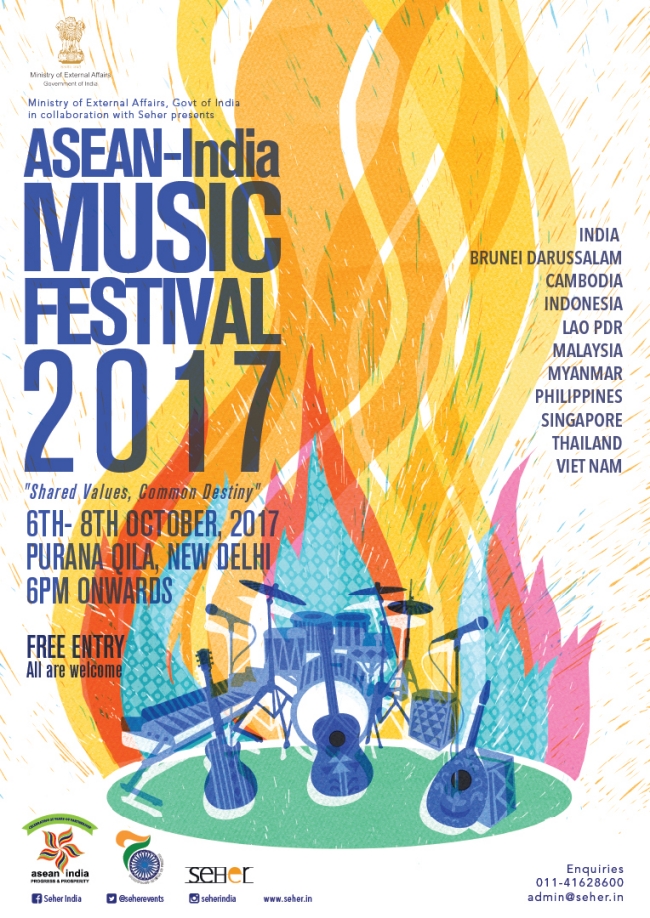 In conjunction with the 25th anniversary of ASEAN-India Dialogue Relations, the Ministry of External Affairs in collaboration with SEHERheld the ASEAN–India Music Festival from 6th-8th October, 2017 in New Delhi. Ms. Preeti Saran, Secretary (East), Ministry of External Affairs and Mr. VongthepArthakaivalvatee, DSG for ASEAN Socio-Cultural Community attended the concluding session. ASEAN and India share common cultural and civilizational linkages that go back to the medieval times. A lot of similarities can be found in literature, architecture, and artistic practices and even in folk practices. It is important to strengthen the people to people and the cultural ties by exploring the similarities while celebrating the differences and provide a platform for the artists and musicians to initiate a deeper understanding of the values and traditions of both ASEAN countries and India.

The ASEAN-India Music Festival featured musicians and bands from the ASEAN region bands from India. The bands from ASEAN and India performed together at one iconic stage at Old Fort, Delhi. This was the first time that musicians from ASEAN and India came together and played on one platform in this unique festival. This not only initiated an interaction and further a deeper understanding and appreciation of the rich musical traditions in ASEAN and India but also increased awareness of the ASEAN identity amongst musicians and creative intellectuals and public at large. They presented various genres of music carrying a flavour of their respective cultural and musical traditions. These contemporary bands played genres such as rock, alternative rocks, ambient, rock and roll, pop rock while still imbibing the flavour of their unique musical traditions and roots and yet appealing to the youth.